Good morning!  How is everyone today?  I went on a day trip on Saturday and I am still tired from the driving.  Why is it that you take a trip for a day to try to relax and you are tired?  Isn’t the point of going out of town to rejuvenate?

We are getting closer to Halloween which means we are continuing our spooky stories.  I hope you are ready for a new Adventure story.  Enjoy! 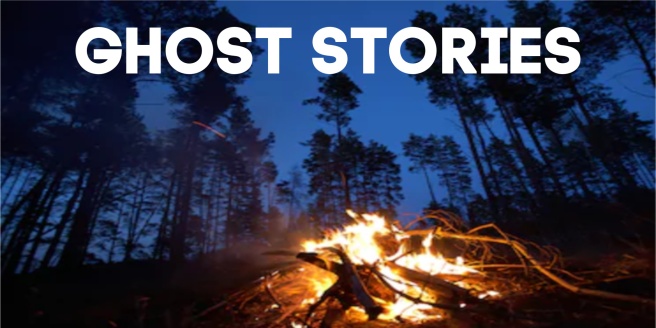 The woods were dark at this time of night.  Every living creature had gone to sleep except for the occasion hoot of an owl and the chirping of crickets.  There was a slight breeze in the air but not enough to cause any issues. But there was one small patch of light from a campfire that was blazing in the middle of the woodland.

Bella pulled her flannel closer to chest, trying to stay warm next to the fire.  She looked around the campfire at all of her friends, 7 of them to be exact. She had been invited to her friend Samuel’s family cabin for the weekend so they could party with no adults, but they all enjoyed just sitting by the fire and swimming in a nearby creek.  It wasn’t the kind of weekend she was expecting but she enjoyed it all the same.

Her friend Brad stretched his arms out and wrapped one around her.  “You cold?”

She shook her head.  “Not really. I just got a random chill.”

“Guys!”  Everyone looked up to see Miranda standing up, her arms outstretched to the sides in excitement.  “We should tell ghost stories! We are out in the middle of the woods and there is no one here. It would be fun!”

Emma shook her head.  “No way! I don’t think I would be able to sleep tonight if we told ghost stories.”

Miranda rolled her eyes.  “Come on Emma. They aren’t real stories.  I’m sure it won’t be that scary. I’ll start.”  She fell back into her camp chair and leaned forward.  “It was a crazy windy night and a boy named Joey was walking home through the woods.”

“I don’t like this already.”  Emma shuddered and leaned back in her chair pouting.

“Anyway.  Joey was walking home through the woods when he heard a noise.  He looked around to see what it was, but there was nothing. So he kept walking.  But something blocked his path. A large rock was blocking the path that he traveled everyday.  He wasn’t sure how the rock had gotten there but he knew he had to either get over it or go around it to get home.  But…when he started to climb over the rock he heard that noise again. It was a whining noise, high pitch and loud.  When Joey turned around he saw an old man wearing all black. He had a large black hat on his head and walked with a black cane.  Joey tried to climb faster but the old man grabbed him instead. Joey was thrown on the ground and the old man’s cane pierced his chest.  The wind that we hear tonight is actually Joey’s screams. He haunts these woods every night, trying to tell people to not be out here alone.”  Miranda smirked while everyone started clapping at her story.

Joshua laughed.  “That’s a good one.  Where did you hear that story?”

Miranda shrugged.  “My dad told me about it the first time we went camping.  That’s why I refuse to go out to the woods by myself.”

Jessica grabbed a marshmellow of the table next to her and speared it with a roasting stick.  “I don’t know if anyone can top your story Miranda. I know I don’t know any ghost stories.”

The group started talking about their ghost stories when Brad leaned over and whispered in Bella’s ear.  “I hope you aren’t too scared. Ghost stories can be a little spooky sometimes.”

Bella giggled.  “No I’m not scared.  Thanks for looking out for me.”

The group continued to talk as the night grew later and later.  The moon was starting to rise higher in the sky, peeping up over the trees.  The fire continued to roar as the night seemed to be coming to a close.

Samuel stood up and stretched his arms over his head.  “Well. I think we should start heading back to the cabin.  These woods can get dangerous if we stay out too long.”

Everyone snickered.  Miranda leaned back in her chair.  “It’s the woods. There’s nothing out here that could really kill us.”

Suddenly there was a blood curdling scream that made everyone jolt.  Emma’s eyes widened as big as saucers. “What was that?”

Brad stood up.  “I think Samuel is right, we should head back to the cabin.”

Everyone stood up and started packing up their things.  Bella scanned the woods around them to see if she could see anything.  The trees didn’t move but the leaves rustled with the wind. But in the distance there was a set of eyes.  They were yellow and round but seemed so far away. “Hey guys, do you see this?”

The group moved toward Bella to see what she was looking at.  Brad wrapped his arm around her. “I don’t like this. We all need to head back to the cabin.”

“What is it though?”  Miranda took a couple steps forward to get a closer look.  Suddenly, there was another scream and every person in the group turned and ran toward the cabin.  They weren’t planning on staying to find out what was out there. But what they didn’t know was that the thing in the woods would continue to haunt them.

Join 194 other followers
Follow 2 Cats and a Laptop on WordPress.com