I’m not going to explain much in this story, I will let it speak for itself.  This is a Feel Good Story.  Enjoy! 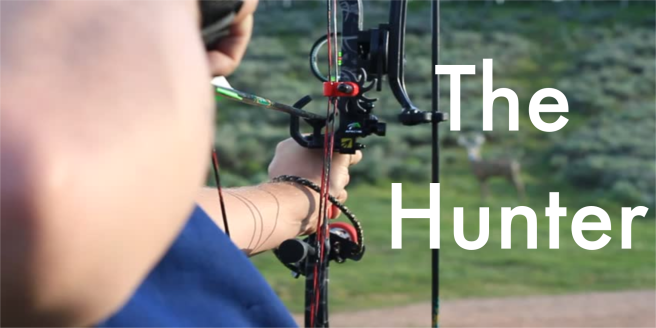 Ty sat in the tree with his bow and arrows.  He had been sitting there all day hoping to find something on this hunt, but so far there had been nothing.  Nothing!  This was his first time hunting in months and he was going to be very upset if he ended up going home with nothing.

As he sat there waiting, there was a shuffle below him.  Ty’s eyes drifted down to the bushes to see a deer walking out into the open.  She was beautiful, or maybe he was just excited because this was the first deer to walk into his sights all day.  But either way he was excited and ready to take the shot.

He slowly reached behind him to grab an arrow out of the quiver behind his back, trying very hard to not make a sound.  His finger tips tapped the tops of all of his arrows, desperately trying to grab one of them.  Ty finally gripped one of them and gently pulled it out of the quiver.  The deer stopped.  Ty stopped, hoping to not scare the deer off from the sound.  The deer started to move again, completely unaware of Ty still sitting in the tree.

Ty finally got the arrow out of the quiver and loaded it onto the bow.  His fingers gripped the string and he started to pull back.  He brought the bow up to his eye, closing one to focus on his target.  His arms shifted slightly to move the bow to the correct position.  He breathed in and started to breathe out, about ready to release the arrow.

But before he could release the arrow there was a rustling beneath him.  Ty’s vision shifted downward, keeping the arrow still at the ready.  A fawn walked out of the bushes and ran over to his mother.  The small baby stared at his mother, waiting to be shown where to go and what to do.

Ty still had the bow drawn but was now in a dilemma.  He didn’t want to take a mother away from her baby but he also didn’t want to go home empty handed.  His hand started to shake, unsure what to do in the situation.  Ty took a deep breath and finally loosen the bow.

The bow and arrow fell to his side.  He couldn’t do it.  He couldn’t take a mother away from her baby.  He wasn’t that big of a monster and a bad person to do so.  Ty sat there, watching the two of them munching on the grass in the field.

He waited until they left before he got down from his perch in the tree.  He knew he was going home empty handed but he didn’t really mind.  He spared a life today and that was something to be proud of.  Ty wasn’t proud of the fact that he came home empty handed, but he was proud of himself for sparing a life and letting a baby grow up with his mother.

One thought on “The Hunter”